Back to basics for reality TV brand rebuild

In 2009, MasterChef took the Australian television landscape by storm. It dived head first into an empty field and reaped every possible reward. From something completely unknown to a viewership of 4 million (or roughly 18% of the population), MasterChef created a household brand name and a workplace talking point. But at the end of its fifth season, MasterChef was a shell of its former self and was losing the reality TV cooking wars.

The success of MasterChef in its heyday was partly due to being the first of its kind in the field, but also from having a really simple formula and doing it very well. The contestants they chose were likeable, all had their own quirks and personalities (which helped promote the brand further) and they had a simple proposition: we help amateur cooks become professional quality chefs. The show was about the journey the contestants went on, not about gimmicks, or over produced faux-drama.

At its peak, MasterChef was one of the hottest brand commodities in Australia. All of the latter stage contestants had a chance to carve out their own personal brands, celebrity and international chefs were given the opportunity to boost their Australian profile and the major sponsor, Coles, had a new avenue to win the supermarket wars.

So why change the formula? Successful shows (of all kinds) find ways to build and retain their audience. But for a reality show, does that involve sticking to the tried format and risk the audience getting bored or trying to introduce new twists every time to keep audiences guessing? Both have their inherent risks but both can also work if managed properly. Unfortunately, the decisions made by MasterChef seemed a negative extension of its original brand values.

For starters, MasterChef Season Five pulled the gender card from the outset. They pulled the most obvious go-to gimmick for a fledging reality show and it immediately put the audience off side. They then followed through with a barrage of themed weeks, poor contestants (in skill and relatability), and retreading the steps of the same, tired formula — even more so when they took every possible opportunity to create spin offs. The emphasis was on conflict between personalities through challenges, not the growth of the individuals in their attempts to realise their cooking dreams. 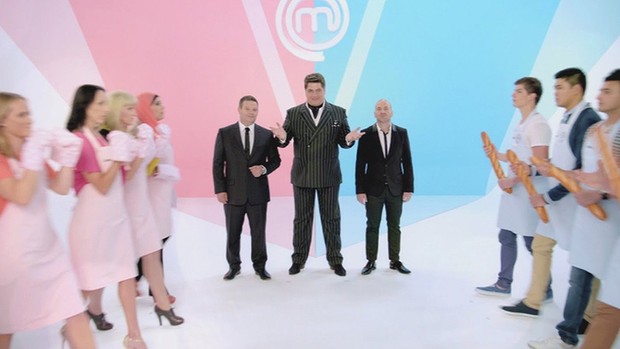 What’s worse, the ridiculous set design or the use of baguettes as an over-emphasised phallic object?

Season Six starts in August, so MasterChef has the first half of the year to repair its brand image and get people excited again. It needs to remember that the presenters are brand ambassadors and should conduct themselves in a manner befitting of the brand’s values and voice. MasterChef has celebrity cache above and beyond its direct competitors and figures like Heston Blumenthal and Jamie Oliver do wonders for public perception. But the show is about the contestants and bringing the audience along for their journey. Compare the personalities from the first couple of seasons with those from the last — the story Julie Goodwin pulled out to get over the line in the first season still resonates, whereas who remembers a single contestant from last season? The personalities make the show and they should be used to set the tone ahead of time. My Kitchen Rules plays up the dynamic between the contestants (and made a lot of people hate-watch the last season) but that makes it less endearing in the long term. MasterChef originally brought charm, likeable personalities and storytelling to the table and the audience responded positively.

There’s still enough goodwill in the bank that it can manage another shot at success. But how it leads into the new series and how it projects the tone in the first couple of weeks will be its make or break point. Follow the formula of the last season, and the show will be dead in the water. But reinvigorate the brand with the charm and storytelling that originally made it a reality tour de force, and we may well see MasterChef reclaim its crown.