Matt Damon and Ben Affleck have been doing the Internet rounds, as they try to raise money for the East Congo Initiative and Water.org. In a collaborative effort, the two celebrities offer the chance to hang out with them on a ‘best friend double date’, and tickets started at only 10 dollars each (in essence a donate-to-charity raffle). Similar to crowd-sourcing, the more tickets you buy (the more you spend), the greater reward you get — aside from the opportunity to win the major prize. But what sets this apart is their fantastic campaign video, which does wonders for both the charities and their personal brands.

From the outset, the two play off each other perfectly — making fun of past movie mistakes, playing one-up and comparing awards. It’s a hugely entertaining piece of advertising, and makes you genuinely want to spend time with both of them. But the outcome is raising money for two very worthy causes.

Having a celebrity ambassador on board for your brand always comes with inherent risks. They are an X factor that you may not be able to control, and if they step out of line, it can reflect poorly on your brand (think Lance Armstrong…). But in this case, both actors bring charm and likeability to how they present themselves. Matt Damon especially has been known to poke fun at himself, and often appears in cameos that present him as a genuinely entertaining person.

The pair stepped up the campaign by enlisting the help of late night talk host, Jimmy Kimmel, who is well known for celebrity collaboration and prank pulling. When a series of Tweets claimed that Matt Damon was too scared to join Twitter, he responded by sending through the below fax: 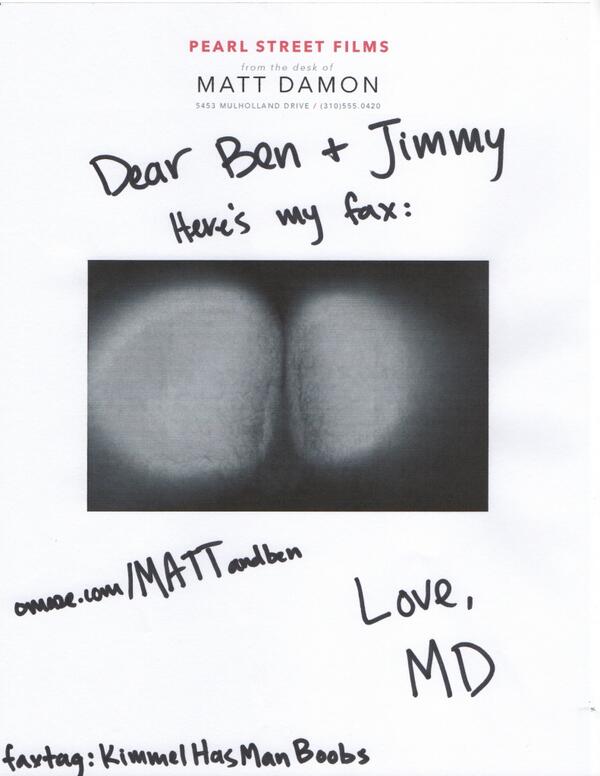 Crude and wonderfully hilarious, the exchange continued to boost the campaign, ultimately benefitting both charities as more people bought tickets.

What we’re left with is a wonderful example of celebrities using their status to support good causes. People tend to be tired of the multitude of charities asking for assistance. While they’re all worthy causes, it’s hard to differentiate between most (without personal connections or impact). The next step in donation-raising is to create experiences and reward people for donating. Although it could be viewed as a sad state of affairs that we’re all so jaded we require a reward for giving to charity, I see it as a new world of opportunities for charities to not only promote themselves, but all the good work they do. Within these experiences is the opportunity to educate audiences, making it a much more compelling and rewarding interaction. With this increased interaction, audiences will become brand advocates and speak on behalf of charities around the world. That increase in conversation will hopefully result in increased positive outcomes.