Why every day should be R U OK? day

September 10 is “R U OK?” day in Australia, an initiative that seeks to encourage people to check up on their friends and family by asking how they are in aid of suicide prevention. It is, without a doubt, a very important and worthy cause and one very close to me, which is why I am conflicted about whether I think it is a positive or negative initiative.

I have battled with anxiety and depression since my early teens. It manifests itself in strange ways, and while it has definitely improved, it’s still not something I have total control over. Those that know me have seen me through the high points and I have pushed their tolerance levels through my low points. Most view me as a happy and confident person and that’s something I actively work on every day, even if the internal does not match the external. There are no consistent triggers, so it has become a matter of riding the waves when they occur and working to decrease the frequency, length and depth of the troughs.

Because of this, I have always had an interest in depression, its management and its perception. My post graduate studies were dedicated to understanding how and why anti-depressants were advertised and what people understood depression to be. I was fascinated by the realisation that even though 20 – 25% of the population reportedly suffers from depression, there were no consistent definitions of the term. Commonalities, yes, but I was able to create a book of answers to the statement “to me, depression is…” and no two were identical. In my final exhibition, a couple from the US asked if they could have a copy of the book because they thought it would help their son who was dealing with depression. I’m still proud of that piece of work. 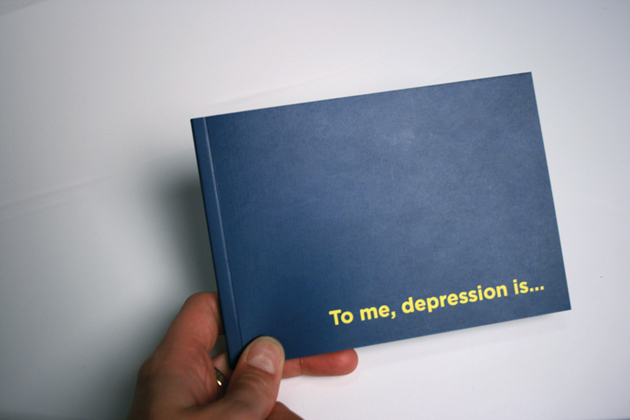 With this in mind, how could I view R U OK? day as anything other than a fantastic idea?

The issue we face as a population now is that there is so much to care about and so many causes that require our attention that we are simply overloaded. No one can care about everything, so very quickly we care about nothing. It is definitely a good thing that we shine the light on depression for 24 hours, but that can lead to flippancy over the other 8741 hours of the year. Depression lurks in the shadows. It isn’t played as a first news story so quite quickly, it is forced to the side as we are bombarded with messages about another cause or concern.

This is a symptom of the whole cause-based landscape and one that frustrates me because I cannot think of a possible solution. The trouble with placing complete emphasis on a cause over a 24 hour period is that it can lead to people acting once and thinking that they’ve done their bit. Donation made, social media update complete, pat on the back, next. But depression doesn’t play into our calendar. Today I might actually be ok, but tomorrow, or next week, or next month, I might not be. The broader issue here is that discussion about and acceptance of depression is relegated to a tiny window. And if, like the stats above, one in every 4 Australians suffers from this condition, 24 hours is not enough.

The recent media attention about Buddy Franklin will hopefully lead to more widespread acceptance of depression. One of the struggles I’ve had is my own perception of depression being a weakness and not wanting to admit it amongst my peers. While objectively I know that is the wrong impression, subjectively, it is difficult to turn that into a reality.

Many media commentators have already written better articles about why the awareness of someone like Franklin dealing with his depression will increase general acceptance and help to make it OK to be vulnerable and open up about what’s going on. Even if not defined as depression, the ability to discuss your fears, worries and concerns should be just as acceptable as your passions and all the good things going on. What stops most people from doing this is the fear of how it will be perceived by those around them. It takes a huge amount of courage to open up because it is like jumping into the unknown. You hope that the person you’re speaking with will be on your side (and again, objectively 99% of the time they are), but you can never be sure.

So today is R U OK? day and I fully support asking your loved ones how they’re going. But don’t forget, that question is just as important on every other day of the year. And if they say to you that they’re not and that they’re struggling with something, then your response should be ‘that’s OK’.